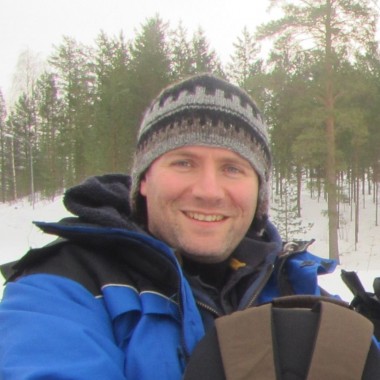 Like most British people Graham was convinced that winter is not a pleasant time of year, but if working for the Aurora Zone has taught him one thing it is that there are better winters out there and you do not have to travel far to find countries and people who embrace everything it brings.

Now, like those who live in the Arctic Circle, winter is his favourite time of year as it brings with it so many opportunities to explore and enjoy the natural environment and of course the dark nights that bring the Aurora into the picture.

At Brändön Lodge in Sweden not only did Graham get to travel in a hovercraft exploring the archipelago of islands marooned in the frozen sea but it also took him to the edge of the pack ice where seals come up out of the water and onto the ice.

Journeying further north, Graham met the most chilled out huskies and Richard, their musher. Richard trusted him enough to let him take a turn at “steering” the dogs and whilst it cannot be argued that this is the fastest form of transport in the Arctic it is certainly Graham’s favourite.

Graham has been lucky enough to explore the Finnish Lapland in autumn and was blessed with seeing some magnificent Northern Lights displays. Whilst the winter is a magical time of year to try hunt the Aurora, Graham recommends Finland in autumn for its colourful setting with leaves turning to vibrant shades yellows and golds, fantastic Aurora potential and surprisingly mild temperatures.

What kid hasn't dreamt about living in a treehouse? Usually, such fanciful ideas usually last only as long as it takes for the next windy day to come along and destroy your efforts. Yet at the Treehotel Graham’s childhood dreams became an adult reality and with a degree of sophistication far exceeding his expectations. From the funky and family friendly UFO to the stylish Mirrored Cube and Cabin there is a room for everyone at the Treehotel but Graham’s first choice would be the Blue Cone with its fantastic views across the snow-covered valley.