View all Kp Index holidays
looking for more inspiration
Next: The Sámi People

What is the KP-Index?

Most people in the UK would associate the initials KP with a tasty range of salted snacks. However, in Northern Lights hunting circles, the initials have a completely different and yet, vitally important significance.

The Kp-Index - derived from the German “Planetarishe Kennziffer meaning “Planetary Index” - is a measure of geomagnetic activity in the Earth’s atmosphere. Geomagnetic activity is the origin of the Aurora Borealis in our night skies and hence the ferocity of that activity is closely monitored in order to maximise chances of witnessing Mother Nature’s greatest wonder...

The Kp-Index does just that by utilising a scale from 0 to 9 where 9 represents a hugely significant geomagnetic storm. However, such storms are very rare indeed (approx. 1 every 3 years) and historical records point to Kp1, Kp2 and, to a lesser extent Kp3, being far and away the most frequent levels.

The Kp-Index and Geomagnetic Storms

As mentioned previously the Kp-Index ranges from 0 to 9 representing geomagnetic activity on an increasing scale. When it reaches Kp5, activity is said to have reached storm level and is also measured using the Geomagnetic G-scale from G1 (minor) to G5 (Extreme).

Geographical impact of the Kp-Index

The Kp-Index provides a valuable estimate of where the Northern Lights might be visible. It’s not an exact science as other factors come into play (cloud cover and daylight for example) but roughly speaking, the Kp forecast provides a reasonable indication as to where the Aurora Borealis might appear.

This is, of course, dependent on you being somewhere dark with unobstructed views of the northern sky. However, assuming that conditions are in your favour, here’s how the Kp-Index translates itself geographically.

This is why all of our holidays are situated at 66°N and above (i.e. higher latitudes) in Northern Europe. The most frequent Kp levels are between Kp0 and Kp3 which means that the Aurora Borealis appears in those areas more frequently than anywhere else.

For the Northern Lights to be visible further south, much higher geomagnetic activity is required and this  occurs far less frequently. For residents of the UK and Europe, a rough rule of thumb might be:

In North America, because the Auroral Oval is centred around magnetic rather than polar north, the Aurora Borealis can be seen at lower latitudes. Assuming that you were outside the city on a clear night and with unobstructed views to the north then, roughly speaking:

It is important, however, to remember that the Northern Lights appears most frequently at high latitudes.

This is because Kp1, Kp2 and, to a lesser extent, Kp3 are by far the most common levels of geomagnetic activity. This restricts regular Auroral displays to an area around, and just above, the Arctic Circle. Essentially, that is where you have the very best chance of seeing the Northern Lights. 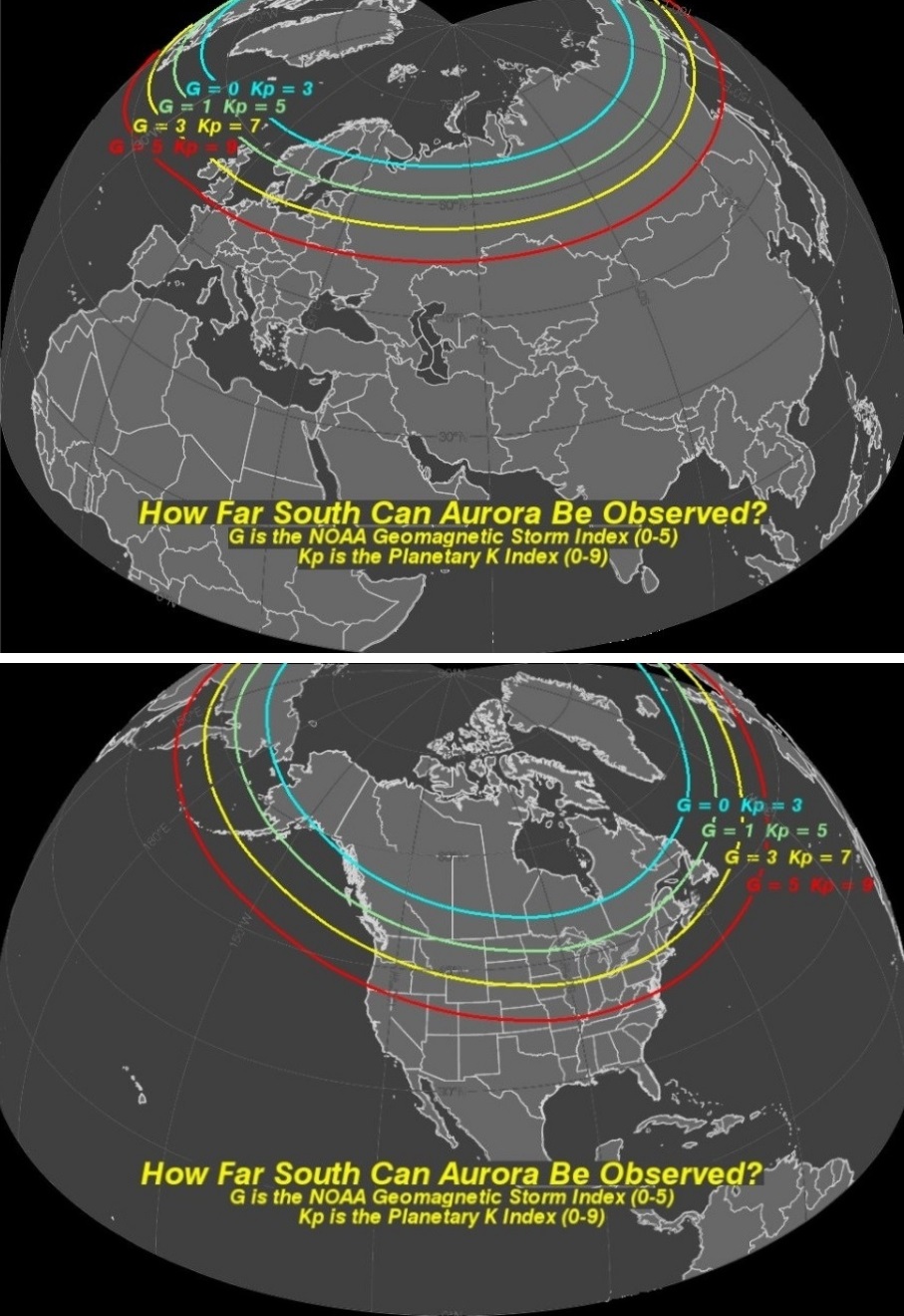 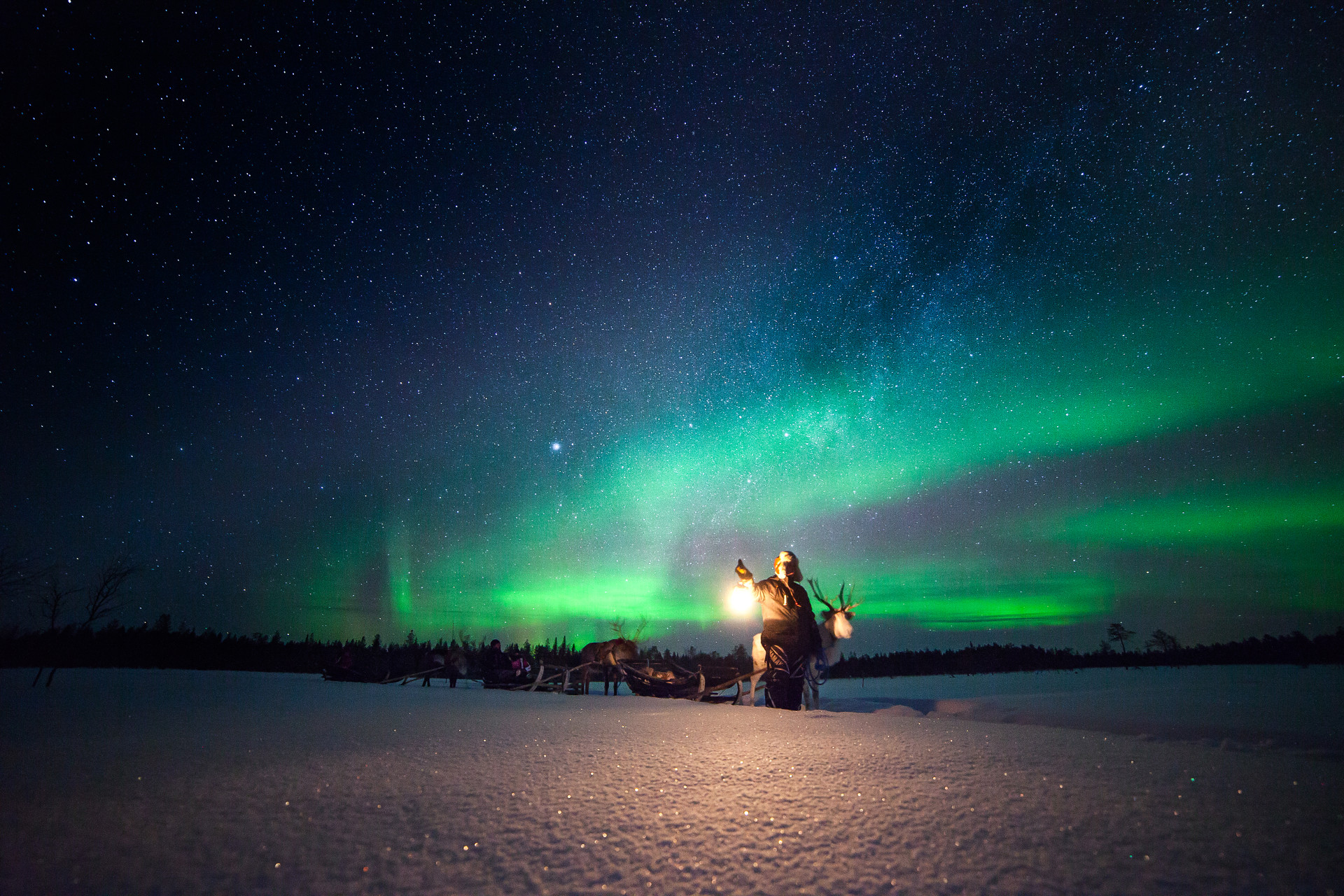 Where is the best place to see the Northern Lights?

Of course, this still begs the oft-asked questions; Where is the best place to see the Northern Lights? There is no one place where the lights appear most frequently. If geomagnetic activity is occurring overhead then it doesn’t matter if you are in Sweden, Iceland, Norway or Finland. As long as you are somewhere in that Auroral band you are giving yourself the best possible chance of seeing some spectacular Northern Lights displays.

We would add a caveat to that however. It is not enough to simply base yourself in a northern city like Tromsø or Reykjavik, as Aurora hunting requires much more. You need to escape the light pollution of large towns, cities and ski resorts because the glare caused by human population will dull or even, obscure the Northern Lights.

Watching shimmering lights as they dance across a coal-black Arctic sky is an experience bordering on the mystical. To give yourself the greatest chance of enjoying the magic, you have to be where the lights appear most frequently. Essentially, this means being somewhere in the area covered by Kp1 and Kp2.