View all Northern Lights in Winter holidays Search for a different holiday
looking for more inspiration
Next: Spring

Winters are long in Finnish Lapland, Swedish Lapland and Northern Norway but the locals embrace it like no other season and, rather than cowering inside, you'll find them outside enjoying snow-based activities such as dog sledding, snowshoeing, cross-country skiing, snowmobiling and more.

There is a perception that the Arctic Circle is constantly pitch black for months on end but nothing could be further from the truth. It is true that the sun disappears below the horizon for a few days or weeks depending on how far north you venture but, there is always plenty of residual light reflected by the snow.

In late December and early January, when the sun doesn't rise, the land is bathed in a blue/grey light which the locals call "Blue Time". It is almost spooky, certainly ethereal and creates a genuine sense of being somewhere very different indeed. Once February arrives the days really begin to lengthen and by the end of March, it becomes almost tangible as the daylight increases by almost 10 minutes daily. In March, the days are far, far longer than they are here in the UK or Europe.

Winter is a great time to travel if you enjoy stunning landscapes and activities that are very different from anything we have at home. Winter is a time when you can freely tick items off your bucket list: Dog sledding? Done. Slept in an ice hotel? Done. Seen the Northern Lights? Done.

Most importantly, winter brings dark, dark skies which highlight billions of stars and, of course, the Aurora Borealis. To stand on a frozen lake in the middle of nowhere and watch the heavens turn above your head is an amazing, almost spiritual experience, it's something more again when the Aurora is blazing across the Arctic firmament.

About Northern Lights in Winter 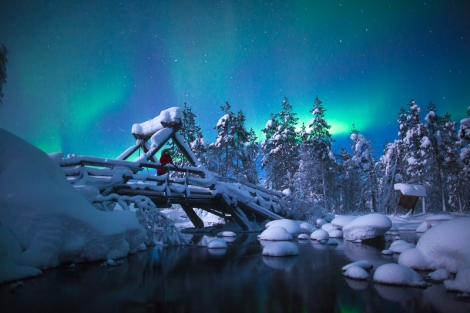 While December gets less daylight, it is often said that early-November is the darkest time of year because there is generally less snow cover to reflect the light. November isn't always the prettiest time of year in the north but the combination of darkness and the proximity to the autumnal equinox mean that the Aurora can very often be seen at their best.

Late November and December bring the big freeze and heavy snowfall which creates the sort of Narnia-like landscapes that you only ever see on Christmas cards. Of course, snow clouds can obscure the Northern Lights but the extended darkness enhances your chances of seeing the Aurora – remember, you can't see them during daylight hours.

The snow usually lies crisp and deep and reasonably even from mid-November onwards which is ideal for all the exciting winter activities and also enhances the Northern Lights chasing options – evening snowmobile safari anybody?

For a few weeks in December, the sun doesn't appear above the horizon and this brings a remarkable phenomenon which the locals call "Blue Time". From about 10 am until 2 pm, the land is enveloped in a grey/blue light that is neither day nor night and could be described as being almost ethereal.

It is notoriously difficult to predict when the first heavy snows of winter will arrive so in early November it is very difficult to determine exactly which activities will be available. November and December bring colder weather and shorter days although it is often said that cold nights yield more Northern Lights as do longer hours of darkness so perhaps we should count these things as a blessing.

In early January most places in the Aurora Zone welcome back the sun that bathes the landscape in a pinkish glow, a remarkable sight to behold. Temperatures in January can be very cold, especially at night when you are searching for the Aurora, but we’ll make sure you are well wrapped up and, it is an oft-held belief that January's colder weather brings more Auroral displays so it's worth braving those sub-zero temperatures.

February often brings slightly warmer temperatures and a lot of accumulated snow which lies very deep and creates the perfect winter playground. The chances of seeing the Northern Lights are good during either of the two months and getting away to a drier and frankly more pristine environment is a great post-New Year tonic.

January is a great time to travel if you want to avoid other tourists as it is not considered to be the peak winter month. As a result, prices are often lower but all the activities including Aurora hunting will be in full swing.

February in the UK is depressing, dark, wet, windy and cold. Contrast that with the Arctic where it will still be very cold but instead of rain, the precipitation falls as fresh, dry snow. February is probably the most popular time to travel into the Auroral Zone as it is the perfect time to combine daytime activities with evening hunts for the Northern Lights. 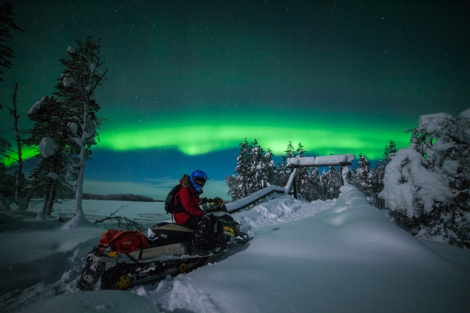