The wild frontier of Norway; discover the Northern Lights over Kirkenes.

Kirkenes is the wild frontier region of Norway. This small Norwegian settlement is the most northeasterly town in the country and offers an enticing mix of history, culture and ideal Northern Lights viewing potential.

Kirkenes is famous for four main things; its Aurora record, its spectacular Snowhotel, its range of activities and for being the king crab capital of Europe!

Exploring the 'Gateway to the East'

Known as the 'Gateway to the East' the town has a population of around 3,500 and sits at around 70 degrees north of the Arctic Circle. It is a town which hides a wealth of history and culture - from the indigenous Sámi population to an industrial mining town.

The most important chapter of Kirkenes's recent history is the role it played during WWII. As a key harbour for Allied supplies to the Soviet front, the town was Nazi-occupied and the battle to take this strategic town back led to Kirkenes being one of the most bombed cities in Europe, second only to Malta. The Soviet Army did eventually succeed, but as the Nazis retreated they destroyed everything behind them. Only a small handful of houses survived the war, so Kirkenes today has a modern, rebuilt feel to it. This important chapter in its history can be explored further in The Border Area Museum which details the key role the town played.

Other tourist spots in the town include its monuments and restaurants which offer a mix of Norwegian and Russian delicacies. On the last Thursday of every month, the town has a Russian Market where traders come from Murmansk to sell their handicrafts and merchandise.

Just outside the town's borders, there is much for visitors to enjoy and a host of activities which make the most of the surrounding nature – mountains, fjords, forest and lakes. A popular activity in the Kirkenes region is a king crab safari. King crab has flourished since its introduction in the 1960s and a safari will take you out via snowmobile or boat, giving you the chance to catch one of these remarkable creatures.

Kirkenes also boasts a wonderful snowhotel, giving you the chance to enjoy an interesting night's sleep in a room made of snow, tucked up warm in reindeer skins and an Arctic-grade sleeping bag.

The Northern Lights are also a very common phenomenon here, given the city's far-flung location.

Excursions can easily be arranged which take you far from the lights of the city and into the surrounding wilderness and its spectacular views of the Arctic sky.

On our Northern Lights Frontier adventure, you will have the opportunity to experience all of those must-do Arctic activities including snowmobiling, husky sledding and fantastic Northern Lights excursions. A real highlight, however, is the visit to the famous Snowhotel and fishing for the delicacy that is the king crab. 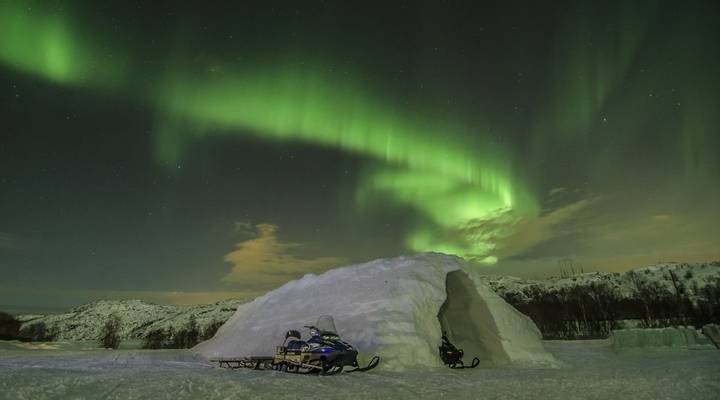 From £1,890pp 4 nights inc exc
View all holidays to Kirkenes