The Science of the Solar Cycle

View all The Science of the Solar Cycle holidays
looking for more inspiration
Next: The best places to spot the Northern Lights without leaving your bed

The Solar Cycle is the 11-year cycle in which the solar activity of the Sun falls and rises in intensity. While the Sun appears from a distant 93,000,000 miles as a constant ball of fire, the variation in activity on its surface is measured by the number of Sunspots or regions of reduced surface temperature.

About The Science of the Solar Cycle

View all The Science of the Solar Cycle holidays 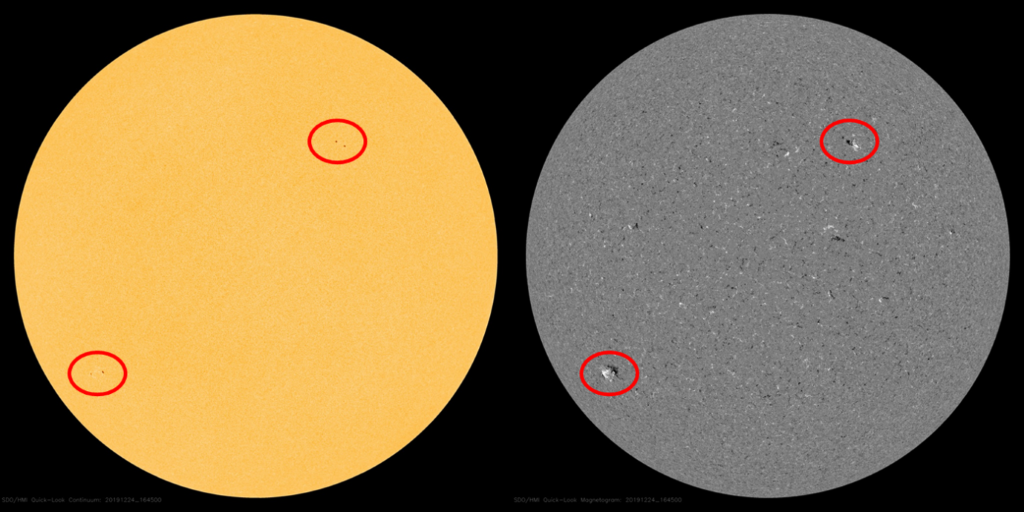 Do The Northern Lights Disappear During A Solar Minimum?

In a word, no. We must stress that the lights do not simply disappear when activity on the surface of the sun is low - a period known as the Solar Minimum. The suggestion that the Aurora is not visible during Solar Minimum is untrue, despite what some misleading articles may say.

Instead, what is happening during a Solar Minimum is that the particles emitted by the Sun become less violent. Consequently, we rarely see explosive solar events that result in the lights appearing outside of the ‘Aurora Zone’; the narrow geographical area between 66°N and 69°N where the lights appear frequently. While the lights will not disappear, your chances of seeing them will be more limited to this zone during the Solar Minimum. The message is plain and simple; If you want to maximise your chances of seeing the Northern Lights then the ‘Aurora Zone’ is where you should travel.

From 14 November 2019 to 23 December 2019, we witnessed 40 consecutive sunspot-less days. This has led scientific commentators to suggest that we have reached our most recent Solar Minimum period and are passing out of the 24th Solar Cycle’s declining stage and are moving towards the upwards stage of Solar Cycle 25.

It is impossible to pin down the exact time at which the Sun passes from one Solar Cycle to another. However, on 24 December 2019, NASA’s Solar Dynamics Observatory observed two new and highly significant Sunspots which were designated as NOAA2753 and NOAA2754 (see Fig. 2) which suggests that the cycle is in the process of starting anew.

Why are the new Sunspots significant in identifying the stage of the Solar Cycle?

The reasons that these Sunspots are significant are twofold.

1. The Sunspots appeared at high latitudes in the Sun’s northern and southern hemispheres as opposed to those from Solar Cycle 24 which emerge closer to the equator.

The difference is evident in the illustration below (Fig. 3). Sunspots from Solar Cycle 24 appear much closer to the Sun’s equator than those from Solar Cycle 25 which are at much higher latitudes in both hemispheres.

2. The magnetic polarity of these two Sunspots was the reverse of those from the fading Solar Cycle 24.

This is a remarkable feature of the Sun’s activity cycle in that every 11 years or so, it’s polarity flips from north to south or vice versa.

This combination of factors strongly suggests that we are entering or have entered Solar Cycle 25.

The most recent forecast from a joint panel of the National Oceanic and Atmospheric Administration (NOAA) and NASA is that Solar Cycle 25 will peak in July 2025, give or take 8 months either side. From now until then, we can expect to see an increase in the number of Sunspots appearing on the surface of the Sun, which in turn should cause an increase in Auroral activity on Earth. 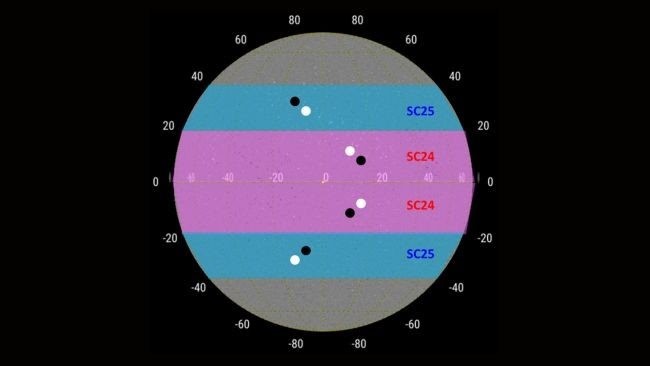 Why Do Solar Cycles Matter to Aurora Hunters?

In our opinion, the answer very much depends on where you are in the world. During a Solar Maximum, there are increased chances that you may see the Aurora from a wider range of Northern locations around the world, whereas a Solar Minimum is more likely to see the lights restricted to the Aurora Zone.

Perhaps the most important aspect from an Aurora Hunting point of view is that the NOAA/NASA panel agreed that Cycle 25 will be average in intensity (see Fig.4). In other words, it will be very similar to Cycle 24 and this gives us a few clues as to where and when the Aurora Borealis might appear.

What we saw during Solar Cycle 24 were some major solar events which led to the Northern Lights being visible over a wide geographic area. However, these events were sporadic, few and far between and nowhere near as numerous as the previous cycle.

This is because the more geographically widespread Auroral displays are almost exclusively the result of Coronal Mass Ejections (CME) which are associated with Sunspots. CMEs are massive clouds of magnetically charged particles which are flung into space and take between one and four days to reach Earth (see Fig. 5). If there are fewer Sunspots then, by definition, there are fewer CMEs and less extensively visible Northern Lights.

The main source of Auroral displays during Solar Cycle 24 was Coronal Holes (CH).

Like Coronal Mass Ejections, Coronal Holes emit Solar Winds but, generally speaking, these winds are not as fast or explosive. However, they still result in the geomagnetic activity in our atmosphere that causes the Aurora to appear in the night sky albeit in a narrower geographic band.

The great thing about Coronal Holes from an Aurora Hunting perspective is that unlike one-off Coronal Mass Ejections, they are far more stable. Indeed, the more persistent can endure through several Solar rotations. The wonderful thing about this is that the same Earth-facing Coronal Hole can send high-speed Solar Winds our way on a regular 27-day (one solar rotation) basis. This happened in 2018/19 with one particularly memorable Coronal Hole reappearing seven or eight times. It was so reliable that we were using it as a very useful forecasting tool!

Science aside, where can I see the Northern Lights during the Solar Minimum?

The most important thing to remember is that the Northern Lights appear at every stage throughout the Solar Cycle but are most frequently the result of Coronal Holes rather than Coronal Mass Ejections. As mentioned, this limits the geographical area in which the Aurora is regularly visible to an area approximately 66°N and 69°N, often referred to as the Aurora Zone.

Yes, you can see the Northern Lights from vantage points much further south but only sporadically and only as a result of a significant solar event. If you were to stand outside every night for a year on say, England’s Northumberland Coast there is a very good chance that your patience will be rewarded. However, you have the same chance of success (or better) if you travel to The Auroral Zone for just a few nights.

In our opinion, the essential thing during any phases of the Solar Cycle is to be in the places where the lights occur most frequently i.e. The Auroral Zone. That’s where you have the best chance of seeing the Aurora Borealis regardless of whether we are at the peak of the current cycle or not.

What Do The Experts Say?

Markku Inkila is a Northern Lights Photographer and Guide who has grown up in North East Finland with the Aurora Borealis as a constant companion. We asked him for his opinion regarding the best time in the Solar Cycle to see the Northern Lights:

“There has been lots of talk about the Solar Minimum that was supposed to be last year and the year before, but the thing is that we are in the middle of the "Aurora Zone". It doesn't matter what year it is; we see them nearly every day when it's a clear sky.”

Plan your trip to the Aurora Zone for the best chance to hunt the Aurora Borealis. Call us today to find out more about ticking the Northern Lights off your bucket list.