Abisko and the most unlikely Aurora

If the sky is cloudy you won’t see the Northern Lights, simple as that. However, this is also one of the reasons that Abisko in Swedish Lapland is one of the very best places in the world to see the Aurora Borealis.

In terms of topography and meteorology, Abisko is blessed by a happy combination of favourable winds and cloud-dispersing mountains which work in tandem to create some of Northern Scandinavia’s most cloud-free skies. 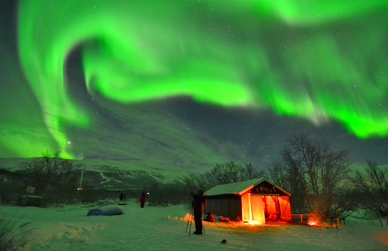 I work for a Tour Operator called The Aurora Zone and one of the best aspects of my job is searching for the Northern Lights.

That’s exactly what I was doing on this occasion so driving from Norway’s Arctic Coast I was naturally excited about the prospects of seeing the Aurora later the same evening. My optimism was soon tempered however as I turned east from Narvik to find myself confronted by a battleship grey sky and a gathering snow storm which had caused the closure of the mountain road to Abisko.

I managed to ascertain that if I waited long enough then a snow plough would arrive to lead us in convoy across the border into Sweden. I wasn’t convinced because, looking at the ever increasing gloom, the snowy phantoms and ghosts that swirled around the car and a sky so thick with cloud, I wondered if I’d ever see the night sky again. So much for seeing the Aurora from Abisko I muttered to myself.

After waiting for well over an hour, our promised snow plough arrived and the convoy of vehicles slowly wound its way from Norway into Sweden. 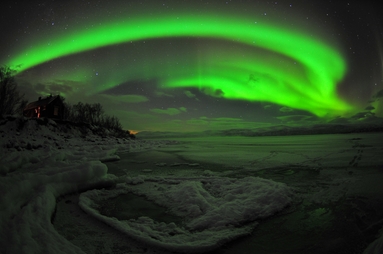 The sky remained blanketed in thick, grey cloud and the snow continued to fall so densely that the car in front was barely visible despite the compulsory flashing emergency lights.

I was relieved to reach the excellent Abisko Mountain Lodge and to be warmly welcomed by our hosts Mina and Dick. After a quick dust down (snow down?) I joined them for an excellent dinner (who says cuisine can’t be good in far-flung corners?) and found myself relaxing easily into the Mountain Lodge’s comfortably laid back ambience.

Despite the excellent fare and company on offer though, I couldn’t help but notice that the weather had remarkably cleared. In just a couple of hours, the Arctic blizzard had calmed and visibility was vastly improved. More pertinently however, those thick, seemingly immoveable clouds had cleared, Abisko’s winds and mountains had weaved their magic and amazingly, patches of clear sky now opened up above my head.

And, even more amazing, was a very faint, wispy, green light in the night sky. It wasn’t the most spectacular or vivid Aurora Borealis I’ve ever seen (to be honest it was pretty rubbish!) but it was very probably the most remarkable.

A few hours earlier, I would have sworn that the sky would never again be visible but Abisko and the Aurora Borealis had weaved their magic.