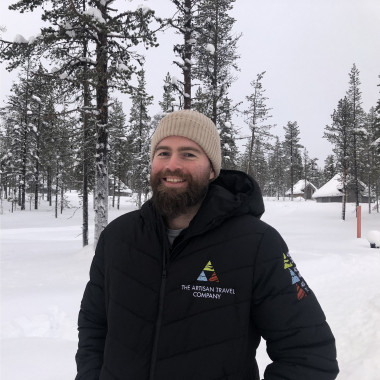 Since graduating from the University of Lincoln in 2009, Niall has been lucky enough to have visited many places considered bucket-list worthy. From backpacking across South America to spending a year living “down under” in Australia.

Despite considering himself fairly well travelled before joining The Aurora Zone, Niall had never experienced a holiday to the Arctic before. However, Niall didn’t have to wait long to embark on his first adventure to the Arctic North!

Niall’s maiden trip was an adventure in Iceland, travelling along the country’s famous ring road over 8 nights. He and his colleague Caitlin, traversed the plains of the South and the Fjord regions to the East, all the way to the cold North, encountering all of the quickly changing weather patterns you come to expect from Iceland as well as being lucky enough to get up close to some of the stunning volcanic scenery too.

Staying in the Northern Lights Inn on the final night, they were even lucky enough to witness an Aurora display! Not a bad way to end his first trip away!

Niall’s second Arctic adventure was a whistle-stop tour of Finnish Lapland, taking in many of our favourite destinations. There, he was able to experience some incredible Arctic activities including, dog sledding, Aurora hunting by snowmobile and snowshoeing at night.

Now that he has ticked Iceland and Finland off his list, Niall hopes to experience a trip to Norway for a chance to hunt for the Northern Lights on a catamaran as well as a trip to Sweden to stay in the world-famous ICEHOTEL®.