Confirmation that the Sun has more than one solar cycle.

Space weather is always changing and this week scientists from Stanford University have published a paper confirming, as suspected, that there is more than the 11-year solar cycle.

The solar cycle, also known as the sunspot cycle, is the periodic fluctuation of sunspot activity on the sun's surface. Sunspots are areas of reduced surface temperature and magnetic field strength, and they are typically associated with increased solar activity such as solar flares and coronal mass ejections. The solar cycle has a period of approximately 11 years, and it is characterized by the number of sunspots observed on the sun's surface.

For over four decades another term describing solar activity has sporadically appeared in the literature, the “Extended Solar Cycle.”  The extended solar cycle refers to the possibility that the solar cycle, also known as the sunspot cycle, may be lasting longer than its typical 11-year period. There is evidence to suggest that the current solar cycle, known as Solar Cycle 24, may be extended and could last for as long as 15 years.

However, Data from Stanford University’s Wilcox Solar Observatory (WSO) reveals that two solar cycles are happening at the same time, and neither is 11 years long. “We call it ‘the Extended Solar Cycle,'” says lead author Scott McIntosh of NCAR (National Center for Atmospheric Research). “There are two overlapping patterns of activity on the sun, each lasting about 17 years.” 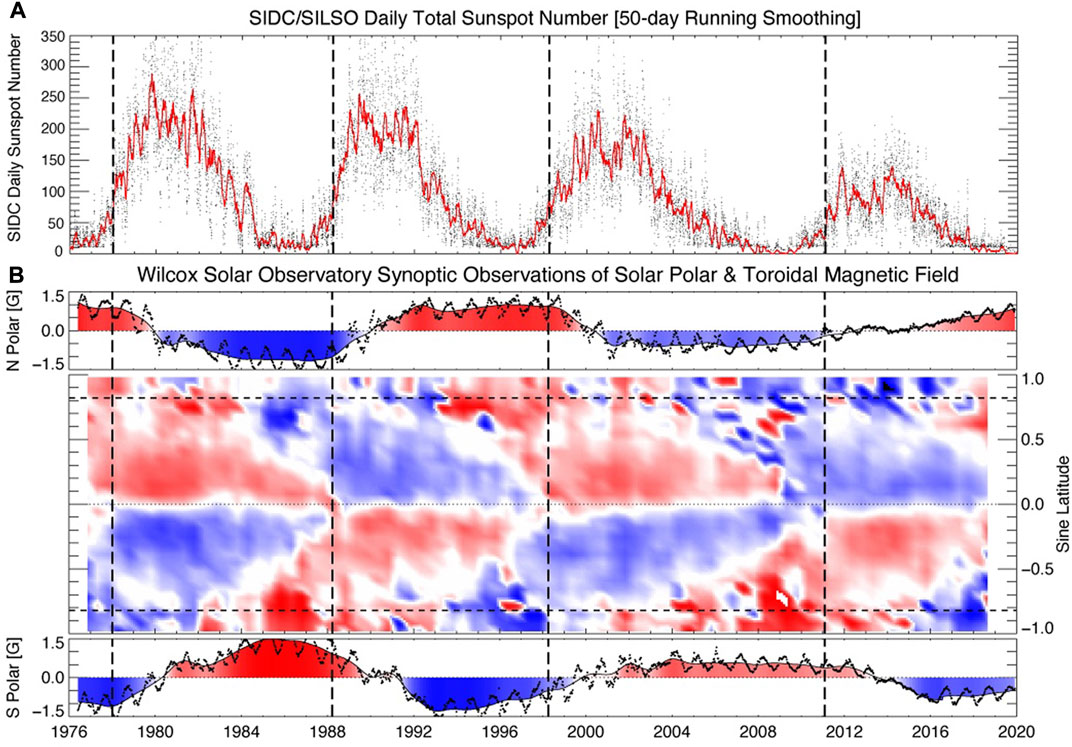 The image above is a collection of solar data since 1976. The top panel shows sunspot counts since 1976. The curve goes up and down every 11 years, which explains why everyone thinks the solar cycle is 11 years long, we have known this for many years. The bottom panel shows what’s going on underneath the surface.

“The red and blue colours represent magnetic fields on the surface of the sun,” explains Phil Scherrer of Stanford University, a co-author of the paper who works closely with data from the Wilcox Solar Observatory. “We have been monitoring these fields since 1976, gathering a unique long-term record of the sun’s magnetism.”

Wilcox data show not one but two co-existing patterns of activity. They overlap in a way any is similar to singing rounds, you may have sung this in school or whilst listening to a choir. A round is a musical piece in which multiple voices sing the same melody, but start the song at different times. Imagine a group of children singing “Row, row, row your boat.” Half of the kids start first; the other half start 5 syllables later. The sun is doing the same thing with its magnetic fields, except instead of 5 syllables (“row, row, row your boat“) the gap is a little more than 5 years.

It's these singing rounds which make up the newly confirmed cycles, singing rounds that last for 22 years, imagine that! As scientists take a more detailed look into these cycles, more information will be revealed about our Sun and will allow us to better prepare and protect ourselves from potentially harmful solar storms. It will also allow us to understand how other types of stars behave and how it affects the potential of life on planets around other stars in our galaxy.