As Product and Operations Manager here at the Aurora Zone, I have been a regular visitor to the more northerly and remote corners of Finland, Iceland, Sweden and Norway for many years. At first, the thought of travelling to places that lie north of the Arctic Circle was somewhat daunting but with growing experience it is something with which I have grown very comfortable and I occasionally found myself digging around for evermore remote places to visit.

One such place was Greenland and when I finally went there a couple of years ago it fully lived up to its out-in-the-sticks billing and, despite all my previous travels, it caused me to re-evaluate my definition of words and phrases such as “distant”, “isolated”, “far-flung” and “out-of-the-way”. 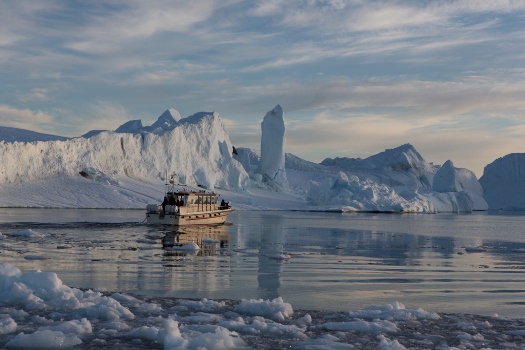 I’d flown into Kangerlussuaq and knew I was somewhere very, very secluded when I found myself walking from the plane to my hotel where the canteen doubles up as the Departure Lounge and the next few days exploring, and flying over, the vast Greenland ice cap were as thrilling as any I have ever experienced.

While the days were exciting, the first couple of evenings proved to be something of a damp squib. Greenland is renowned as one the very best places in the world to see the Northern Lights and before I left the UK, I had been told that Kangerlussuaq’s minimal light pollution and frequently cloudless skies would offer excellent Aurora watching opportunities. One the first night, nothing, and on the second, we eagerly gathered outside as a shadow of greyish/green light in the northern sky failed miserably to manifest itself as significant auroral activity.

I was excited particularly excited about Day Three of my trip because the itinerary included dog sledding and this is something I have always enjoyed. However, I knew that in Greenland they do things slightly differently with their hardy Greenland huskies spread out like a Chinese fan rather than in the two rows of dogs I am used to in other countries. That’s exactly how it went. My guide and I sat on the sled as we sped across the frozen Arctic tundra marvelling at the scenery and the eagerness of the dogs. This is the way to travel in the North, the idea of man (or in my case woman_ and beast against a hostile environment is one ,that to me, encapsulates the still largely untamed Arctic in a nutshell. 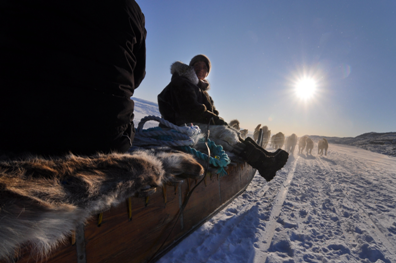 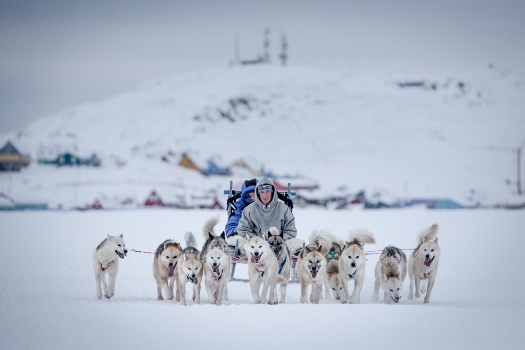 Well, that and the night skies.

As if dog sledding across an unforgiving and frozen landscape wasn’t enough, tonight was the night that my Aurora frustrations were laid firmly to rest. I was just enjoying a post-dinner chat with my hosts in the hotel’s restaurant when I noticed that other diners were drifting towards the exit.

“Northern Lights time!” announced my host so I gulped the last of my coffee, grabbed my coat, gloves and hat (always close to hand when I’m in the aurora zone) and rushed outside to join the small crowd which had gathered about twenty metres from the hotel entrance to enjoy what was already a spectacular night sky.

We stood there for an absolute age but had no concept of the time passing or the cold because we were held spellbound in the Auroras thrall. My experience of the Northern Lights is that it is not so much the colours but the movement which make the very best displays and to say that this one was moving is an understatement. Green rods plummeted down from the pitch black sky while ribbons and curtains of winding and curling and looping green light weave a hypnotic passage across the heavens. It was as good as any display I’ve ever seen and, after the previous night’s disappointment, it felt like the lights had really decided to flaunt herself for our benefit. 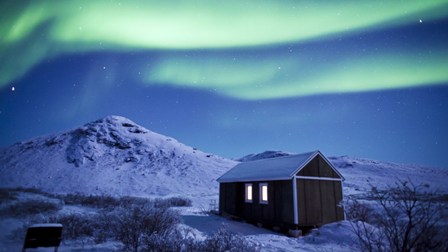 I had expected great things of Greenland and it duly delivered

I had expected great things of Greenland and it duly delivered. It’s not for everybody because you have to have an adventurous spirit and a desire to experience a very different way of life than the one with which we are so familiar here in the UK. But, if it’s space and freedom and the liberty to roam in an unspoiled wilderness that is your motivation to travel then you’ll not go wrong in Greenland.

Do you fancy dog sledding and chasing the Northern Lights in Greenland? You might just find the solution here:

Ilulissat - Auroras over the Ice Fjord

« Three Alternatives to the IceHotel A winter in Harriniva and Torassieppi: An interview with our representative Katrina »