Given the nature of my work I regularly travel to the destinations featured here at The Aurora Zone and, as a result, I get to know the countries very well and also its inhabitants. I most frequently visit Northern Scandinavia and whenever I meet a Finn, a Swede or a Norwegian for the first time I always ask the same question:

“Where is your cabin?”

Almost without exception, Scandinavians own a cabin, a cabin with no running water, no electricity but a cabin which almost invariably enjoys an enviable lakeside position. These cabins are where the good people of Finland, Sweden and Norway escape to immerse themselves in nature, to relax and to just generally have a pretty laid back time.
A few years ago, one of our Finnish suppliers invited me to come over and spend a few days at his remote lakeside cabin. He could get some time away from work in late-October and simply wanted to enjoy some downtime before the busy winter months. 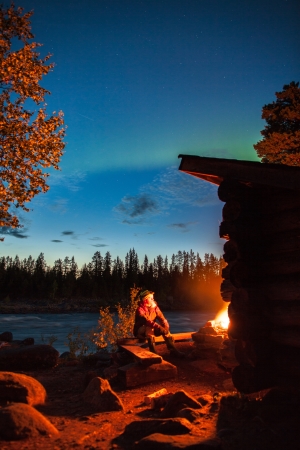 Now, I have to confess that Scandinavia in October didn’t immediately take my fancy but I’m rarely happier that when I’m in the great company of my Finnish friends so I accepted the invitation and made the necessary arrangements.

It was the right decision.

We spent four days simply kicking back, enjoying some glorious hikes and some pretty unsuccessful fishing. Despite having no central heating a combination of an evening sauna and a log fire kept us very cosy at night which was just as well because the early-winter chill was very definitely beginning to bite. The drop in temperature was evidenced by a thick frost which welcomed my morning scamper to the outdoor toilet and signs that the lakes and rivers were just beginning to freeze. 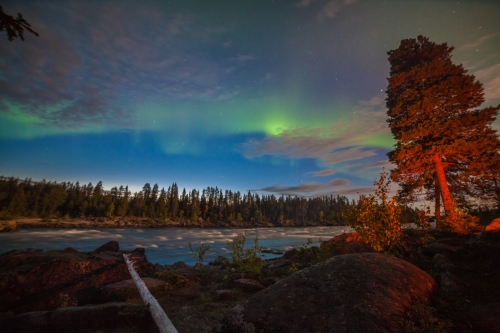 Thankfully, the big freeze was very much in its infancy and the watercourses remained open which is not something I had seen before during the winter when they are frozen over and covered in a layer of snow. And, the great thing about open water is not just that the lakes look particularly beautiful but at night, they yield an added reflected bonus when the Northern Lights are at their best.

October is known to be a good month for viewing the Aurora Borealis.

This is probably best attributed to the fact that despite the impending winter, the weather is still pretty reasonable and there is generally less cloud cover than when the snow arrives in earnest. In addition, the Autumnal Equinox is said to bring increased solar activity around the third and fourth week in October so the chances of seeing a decent Aurora are good.

Lady Aurora was shining on us that particular week because on two out of the four nights we were at the cabin we had to walk no further than a few metres to the lakeside in order to watch the lights dance across the pitch black Arctic sky. The undoubted highlight for me though was that when the lights were at their strongest they were also reflected in the open waters of the lake. In effect, we were treated to two Auroras for the price of one and that is something that will remain etched in my memory until my dying day because it was indescribably beautiful. 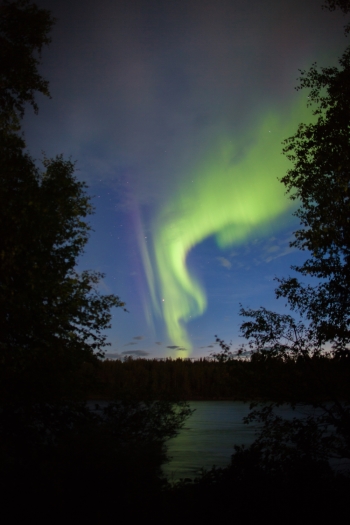 Both displays were relatively short lasting just 15 or 20 minutes but that was maybe for the best because if they had continued, we might not have gone back to bed and, as we all know, you can’t have too much of a good thing. I guess I’ll have to go back for another few days of cabin fever next year in search of another fix and hope that Lady Aurora is once again in the mood to share her reflected beauty.