First impressions of a winter in Lapland

As with most of our guests, my first impression of Lapland in the winter is one of awe that so much snow can possibly exist in one place.

I was never fortunate to go skiing or anything like that when I was younger, so for me this was the first time I had seen what real winter can look like. 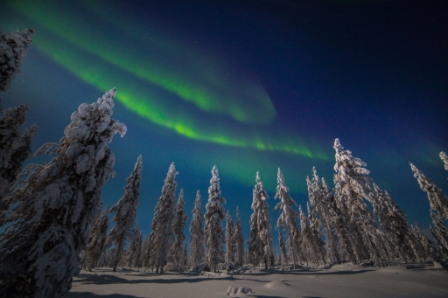 It is obvious when you travel to somewhere like Nellim in Finnish Lapland that the snow in the UK is really rather pitiful and quite literally pales into comparison to the thick deep white snow of Lapland. It covers everything – roads, paths, rooftops, trees, frozen lakes, giving the whole place a magical, pristine and beautiful feel.

The second thing that struck me as we walked outside Ivalo Airport was the light. I was there in January which is during Kaamos – the time of year when the sun does not rise higher than the horizon, which casts the scenery in a blueish glow. Whilst this can be a concern for guests who worry that it will be pitch black during their stay this need not be the case as instead it is more as if it is perpetually dusk.

Indeed what light there is reflects off the snow so it is much lighter than you would expect.

When we reached Nellim, where we were to be staying over the next few days, my impression was that it was remarkably peaceful. The population of Nellim itself is minimal, ensuring a high level of remoteness which, in combination with the thick snow coverage, allows you the chance to genuinely appreciate the silence. On our first evening we took a walk out onto the frozen vastness of Lake Inari which resides just outside the hotel.

Here we took a walk across the thick deep snow which covered the lake and gazed at our new found surroundings with all of their winter beauty. One of the things that struck me was that the sky, when the cloud cover parted, was a dazzling array of stars. As a teenager I was lucky enough to visit Uluru in Australia and Kruger National Park in South Africa, which both offered the best view of the sky I had ever seen, and now I could add Finnish Lapland to the list.

Of course being this far north, the sky has the potential to be even greater in its beauty with the arrival of the Northern Lights, and luckily we did witness such a display as the sky rippled with billowing curtains of green light.

The display was brief, yet beautiful.

So those were my first impressions of winter in Lapland – a land of spectacular colour from white snow to the blue light to the dazzling green of the breathtaking Aurora.

« My first auroras ….. Reflections of autumn »