Witness the Northern Lights at their Peak ~Solar Maximum~

The Northern Lights – An otherworldly experience
Way back in 1958, an absolutely massive solar flare resulted in the Northern Lights being visible as far south as Mexico City. By all accounts, the emergency services were inundated with panicky calls from residents who thought the dancing lights in the sky heralded an extraterrestrial invasion!!

You have to see the Northern Lights up close and personal to understand why the good people of Mexico City reacted in the way they did.

Stand on a frozen Arctic lake and watch curtains of ethereal light shimmering and billowing overhead. It soon becomes apparent why Stone Age or Iron Age man might have believed Mother Nature's hypnotic light show to be the spirits of the departed or celestial warriors engaged in combat of the immortals. 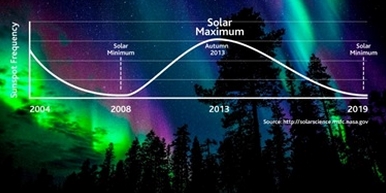 Modern science provides a far more rational explanation for the existence of the Northern Lights but when you are gazing spellbound as the lights dance their otherworldly dance it's not hard to feel an affinity with both our ancient ancestors and the inhabitants of Mexico's capital city.

Solar Maximum – The Aurora Borealis at its peak
Science has a role to play too and no less an authority than NASA has predicted recently that the sun will reach the peak of its 11 year activity cycle (Solar Maximum) in autumn 2013. The equation is simply, the more active the sun, the more likely it is that the Northern Lights will be visible and as you can see from our graph below (extrapolated from NASA's data), the next few winters should witness high solar activity.

Please don't believe those websites that are still suggesting that this Solar Maximum will herald the best Northern Lights for 50 years. This is incorrect. This maximum is predicted to be less intense than was previously thought but regardless, it still represents the best chance to see the Aurora Borealis in a decade.

There is growing speculation that this particular cycle will see a rare "double peaked" Solar Maximum.

"We may be seeing what happens when you predict a single amplitude and the sun responds with a double peak."

Of course, nobody knows for sure what the sun is going to or when and where the Aurora Borealis will appear but in NASA's words

It seems likely, though, that the end of 2013 could be a lot livelier than the beginning.

We're hoping for great things and if last autumn and winter are anything to go by, we don't expect to be disappointed!