Most people when they visit Swedish Lapland head to the far North to Abisko and Kiruna or spend time around the Lulea Archipelago in the south. In doing so they miss the secret that is Tärendö and the Forest Hotel. Location wise you have to look closely at a map. Tärendö is located on the Tärendö river which is a tributary of the larger Tornio rover. Follow this river north and you will pass the Ice Hotel at Jukkasjarvi. The village has a population of 208 people so befriending every inhabitant on Facebook is not going to exceed your ‘friends’ quota. The town, however, does boast one Olympic Gold medallist in Cross-Country skiing! 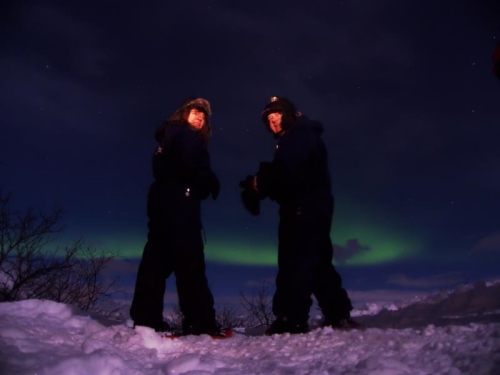 I was travelling as part of my 50th birthday when I visited Tarendo.

I drove with a friend across the border from Finland through the beautiful forest landscapes that characterise this border region. We stopped for the obligatory hot dog at a petrol station. If you know about these hotdogs you make sure you schedule in a stop on your travels.

Located outside the town on the banks of the river lies the Forest Hotel run by Margareta and Ingemar Grape.

You know something is going to be a special place when you have to wait for the reindeer to clear from the road by the Tarendo turn off on the road from Lulea to Kiruna.

Originally the hotel was intended as the local schoolhouse for those working in Forestry, but in 2007 it was converted into the charming hotel that it now is. It really is a ‘great escape’ from the 100mph pace of the modern world. Try for a room at the rear of the hotel which looks out over the river. The presence of bathrobes and slippers is the most encouraging sign as you know that the sauna awaits you, but what you are not expecting is how lovely the sauna area is with its spacious and ambient lounge.

You cannot visit the Forest Hotel without sampling the outdoor traditional wood sauna or ‘bastu’ as the Swedes would say !

To do it justice you have to embrace the concept of rolling in the snow before returning to the heat of the sauna itself and if you do you will feel the benefits immensely.

Time to nip back to your room and change for dinner, which reveals another of the delights of The Forest Hotel – the cuisine. When I visited the chef was an enthusiastic, ice hockey loving 22 year old with a passion for food that belied his tender years. Three courses which would have graced any Michelin restaurant menu. Coffee and brandy by the fire should have been the perfect end to the day, but when you are in this part of the world and the skies are clear sleep is put on hold.

It is hard to convey the excitement and anticipation generated by the chance of a Northern Lights display. The cold, crisp temperature re-invigorates you immediately and just the stars on display are enough Of course you want the main event. I had been fortunate to witness several displays across Scandinavia but that did not diminish my excitement at the prospect of more and my friend, who had never been before was beside herself with excitement.

We wandered down to the river with a few other guests and waited and waited. 11pm nothing, midnight nothing ... at about 12.15 we all started to think it was not our night and the prospect of sleep was a sensible option. Just at this moment a faint hue of yellow and green started to appear to the north. At first we thought our eyes were playing tricks because it then disappeared. Suddenly it was back and we were in no doubt now that the Northern Lights were not going to let us down. For the next hour we were thrilled by a fabulous display of dancing and ever changing colour across the sky and eventually went to bed blissfully happy.

I always look back to that night with incredibly fond memories … superb food, company and a location perfect for its serenity and ambience. I hope to return to Tarendo very soon !

« Green is the Colour.....or not! Sleep under the Aurora Borealis in Finland »