Written by Mark McFaul
Thursday, 28 February 2019 Be the first to comment!
Continue Reading

Written by Mark McFaul
Thursday, 28 February 2019 Be the first to comment!

Peace of mind for your holiday

We appreciate that Brexit uncertainty has led to some concerns amongst those planning a holiday. However, we want to reassure our guests, once you have booked your holiday with us, the cost will not increase as a result of Brexit, even if we incur additional charges.

How will Brexit impact my travel plans?

The UK will leave the EU on the 31st January and will enter an initial transition period until 31st December 2020. During this period of negotiation there will be no immediate change to any regulations regarding travel – everything will remain the same for British Passport holders.

Your EHIC card will still be valid, you can still use EU passport lanes at passport control, you will not need a visa to enter Europe and your passport will only need to be valid for the duration of your trip. Essentially, things will continue exactly as they have been until 31st December at least, and ABTA have recently changed their travel advice to reflect this.

Written by Kirsty Wood
Tuesday, 26 February 2019 Be the first to comment!

From the innovative creators of the Northern Lights Village in Saariselkä, comes the fantastic Levi Resort.

Located 16km from Levi centre and featuring 40 Aurora Cabins, the village has been designed to give you a truly memorable stay during your winter holiday to Finnish Lapland and the best chance of seeing the Northern Lights.

These glass-roofed cabins will give you clear views of the night sky right from the comfort of your bed. What better way to search for the Northern Lights than while you’re wrapped up warm in your duvet looking up at the sky in an Aurora Cabin?

Levi sits in the far north of Finland, high above the Arctic Circle putting it well within the Aurora Zone. This means that it has great Northern Lights viewing potential and with their glass roofs, these Aurora Cabins certainly make the most of it.

Learn more about the resort below or click here to view our holidays to Levi.

Written by Kirsty Wood
Wednesday, 13 February 2019 Be the first to comment!

We’re thrilled to introduce the innovative design in Aurora accommodation from the Apukka Resort in Rovaniemi, Finnish Lapland; the Aurora 360 Cabin.

You’ll be nice and cosy inside the wonderful two-tiered cabin. It comes equipped with electric fireplace and a panoramic glass roof right above your bed for 360o views of the Arctic sky.

Sleeping under a starry sky is enticing enough but with the prospect of seeing the Northern Lights dance above you as you lay in bed, this experience becomes unmissable.

This exclusive accommodation is only available at the Apukka Resort and is a wonderful addition to your Northern Lights holiday. Whether you are looking for a relaxing retreat in the wilderness or you want to take on some adventurous Arctic activities, we offer many different trips to Apukka.

Click here to view all Apukka Resort holidays or scroll down to learn more about the fantastic Aurora 360 Cabin.

Why you should travel in March to see the Northern Lights

Written by Kirsty Wood
Tuesday, 12 February 2019 Be the first to comment!

Many people associate the Northern Lights with the cold depths of winter, and though we have seen some excellent displays come out of our Aurora Zone destinations this season, we’re also extremely excited to see what March will bring.

Written by Laura Gay
Wednesday, 06 February 2019 Be the first to comment!

Who are the Sámi people?

The Sámi people are the only indigenous people of the European Union and are one of the oldest living cultures.

They have been surviving the harsh conditions of Sami Land (also known as Lapland) for thousands of years so it’s no surprise that they’re known for their close connection to the land.

Sami country (Sápmi) and where the Sámi people live now is in Northern parts of Norway, Finland, Sweden and parts of Russia. The total population is estimated at 80,000 to 100,000 people.

During many of our Northern Lights holidays, we offer experiences to give you an authentic insight into this fascinating culture. From visiting the Sámi Siida museum in Inari, the capital of Sámi heritage and culture in Finland, to spending time with a traditional reindeer herder in Menesjärvi, there are plenty of ways for you to learn all about the Sámi life. You could even travel to the very top of Finland to Utsjoki - the only Finnish municipality where the indigenous Sámi people still represent the majority of the human population.

Learn more about the Sámi culture below.

Written by Andy Marshall
Tuesday, 05 February 2019 Be the first to comment! 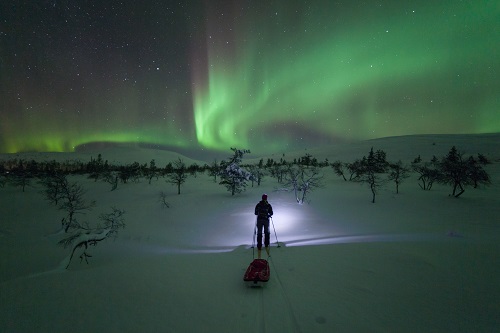 Our #AuroraZoneMoments competition is still going strong and we’ve had another month of fantastic entries.